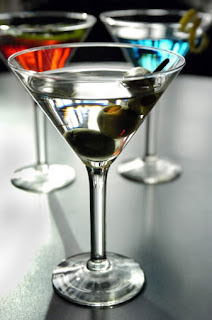 But not for me! I'm at Byzantio having a watermelon martini while Mr. D is in a meeting.

I had to go to school today to do some research assistant work. This is the first time I've been on campus since my last exam. I didn't want to go up there. Mr. D didn't want to go there. However, I needed to get some things taken care of for my professor and didn't want to leave him hanging, since he kindly told me not to do any more work until after finals were over. My work didn't take me too long and I got to see some friends.

Friends that are taking summer classes!!!!

Yikes! I can't even imagine going back to school already. Today is the first work day that I've felt like a human being when I got to work. The TBI really acts up when I've been stressed and law school exams have to be the most stress I've been under since the TBI occurred. The only way I can explain it is the feeling of looking at everything through gauzy curtains or with glasses that aren't the right prescription.

Anyway, though, I feel like I've snapped out of it now. I think it was the four day weekend, just relaxing with Mr. D, getting lots of extra rest and generally just chilling.

While at school I found out that grades aren't due until the middle of June. WTF???? My last exam was already more than two weeks ago. Maybe more than three weeks. How long do they need to grade tests? This is ridiculous.

Now I know why the law review write on isn't until July, I guess, while all the normal schools have them in June. We'll just be getting grades at that point. In a perfect world I could possibly grade on to law review at this point, but in the real world, I'll most likely have to write on. In July. #()#$#@!

Anyway, I'm relaxing and finished with a watermelon martini and I'm now wondering what other kind of martini I should try before Mr. D gets back.
Posted by frillgirl at 4:38 PM

1) My law review works the exact same way -- grade on + write on in July. I will also probably be doing the f*cking write on. Damn Civ Pro.

2) My poor classmates taking summer classes -- they had their last final on a Friday like two weeks ago... and class MONDAY.

I know! Profs at our school don't have to get grades in until mid-June either. You end up sweating the first part of summer worrying about how you did. Ugh! Hope you are enjoying your break. Congrats in becoming a 2L!

frillgirl
Texas, United States
A 2L in the thick of law school.